I’m thrilled to announce that I was awarded the University of Washington’s Distinguished Dissertation Award for Mathematics, Physical Sciences, & Engineering! Thanks so much to my advisor, Emily Levesque, and the UW astronomy department for the nomination. 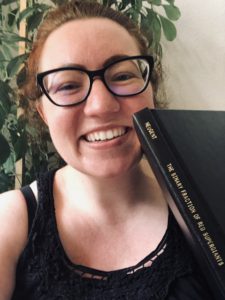 Me posing with my printed copy of my dissertation.

As part of the nomination process, I wrote a 2 page summary of my research for a science-inclined general audience. Here is a pretty good overview of what I worked on these past 4 years:

Massive stars are the cosmic engines of the Universe. The majority of the oxygen we breathe, the silver and gold we prize, and the carbon that allows for life as we know it, is created during the explosive death of a massive star. Such massive stars begin their lives turning hydrogen into helium. But once they’ve exhausted their hydrogen supply and quickly begin burning through helium, their surface temperatures decrease and visually their colors become redder as they cool off. They expand in size to thousands of times the radius of the Sun. Such stars are called red supergiants, and if you placed one at the center of our solar system, it would extend past the orbit of Mars – red supergiants are huge! While many of these stars are like the Sun and exist by themselves, some of them have companion stars that orbit around them forming a binary system. Such binary companions can heavily influence how the red supergiants end their lives, and potentially even change the types of elements created during their explosive deaths. However, until I begin my dissertation, the number of red supergiants with companions was not well understood. In fact, out of the thousands of red supergiants known in the Universe, there were only a dozen with confirmed companions though theoretical models suggested there should be many more. Was this discrepancy due to a lack of effort put into searching for such red supergiant binary systems, or did they simply not exist? What fraction of red supergiants have companions?

I began my investigation by determining what type of star would most likely be in a binary system with a red supergiant. For example, would you expect a red supergiant to have a hydrogen-burning companion like the Sun? Or is it more likely that it would be in a system with another helium-burning red supergiant? Would the companion likely be cool like the Sun and red supergiants, or incredibly hot and blue like Sirius, the brightest star in the Northern hemisphere? I found that, due to the relatively short lifetimes of red supergiants, their companion stars will also be short-lived stars of slightly smaller mass. Such smaller mass and young stars are very hot and thus have very blue colors. Knowing this, I was able to devise a method of searching for red supergiants with blue companions. Using archival images of three galaxies located close to our own Milky Way Galaxy, I first identified the total number of red supergiants in each of these galaxies, and then determined which of them had an abnormal amount of blue light that might indicate the presence of a blue companion. I then observed these candidate red supergiant binaries with some of the largest telescopes in the world in Arizona, Hawaii, and Chile. By examining the observed spectral data and searching for tell-tale features that indicated the presence of a red supergiant as well as a hot blue companion, I was able to confirm new red supergiant binary systems. As part of this work, I discovered over 250 new red supergiant binaries, therefore increasing the number of known systems by a factor of 20! It turns out these systems do exist, but they just hadn’t been discovered yet.

After determining both the total number of red supergiants in these galaxies as well as the number of them in binary systems, I calculated the overall binary fraction of red supergiants and examined whether this value changed across the different galaxies and stellar environments. I was surprised to find that the binary fraction did change and that the value appeared tied to the metal content of the stars. In galaxies with higher metal contents (or a higher fraction of elements heavier than helium), the binary fraction was higher. This is the opposite of what has been found for lower mass stars like our Sun! While the origin of this dependence is still an open question, I believe the metal content influences these systems during star formation rather than later on in their lives. Further research is needed to determine whether the binary fraction of hydrogen-burning massive stars also shows this dependence on the metal-content. Understanding the physical mechanism behind these results is vital towards deciphering many open questions in astronomy. For example, red supergiant binaries are the progenitor systems to the gravitational wave events being detected at the Laser Interferometer Gravitational-Wave Observatory (LIGO) in eastern Washington. My research found that many more such systems exist than we previously expected and hopefully with time and further characterization, we can better understand how these massive red supergiants enrich our Universe with heavy elements.