A little backstory about Andy …

Garrett and I adopted Andy from Look What The Cat Brought In in Colorado Springs in late August, 2022. While he was a healthy kitty, he clearly had issues with his back right leg. He would sometimes put weight on it, but he couldn’t straighten it fully without pain. Because of this, he also didn’t jump higher than the couch. We adopted Andy knowing that we’d need to spend some time (and money) helping him heal and be as happy and pain-free as he could be.

The shelter had done a few x-rays and we brought those to our local vet. She reached out to a cat orthopedic specialist and they determined that his leg had been broken across his “knee” joint and wasn’t able to heal properly. Our options were to basically re-build the joint and then endure 4-6 months of kitty physical therapy, remove his leg, or leave it be knowing that it would never fully heal and would always cause him pain. After talking with our vet and doing a bunch of research, we decided to amputate his back right leg.

Why did we decide to go through with amputation?

1) Cats (and dogs!) are surprisingly adaptable to a limb removal, especially when it is done early in their lives. Since Andy was a little less than a year old at the time, it was an ideal time to transition him to his new tri-pawed lifestyle.

2) Rebuilding the leg joint would be expensive, time-consuming, painful for Andy, and it only had a 60-70% chance of working. For these reasons, we barely even considered it.

3) We did consider simply leaving his leg alone since it wasn’t painful on a regular basis. But, because it essentially had no chance of healing properly, it would be susceptible to arthritis when he got into his adult years and would likely need to be amputated then. So, it seemed better to do the amputation now when he was young and healthy.

Overall, it was a relatively obvious (but still difficult) decision for us to amputate his back leg. Once we decided to go for it, we started researching what the recovery process would look like and how to set all of us up for success. Here’s an overview of what worked for us. Obviously, I am not a vet and this is not medical advice – if you are going through a limb removal recovery with your animal, please listen to your vet!

We opted to use a comfy cone to keep Andy from licking his wound or sutures. We attempted a onesie, and while the picture of him in it is adorable, it was generally ineffective in keeping him from licking. He never learned how to eat or drink with his cone off, so Garrett and I took turns letting Andy have some “cone-free” time in the bathroom to eat and drink. During those breaks, we were 100% focused on Andy and would need to stop him from licking his stitches every 0.5 seconds. Sometimes he’d fall asleep, but most of the time he just wanted to try and get a good lick in. Still, he enjoyed being without his cone for a couple hours of the day when we could give him our undivided attention. 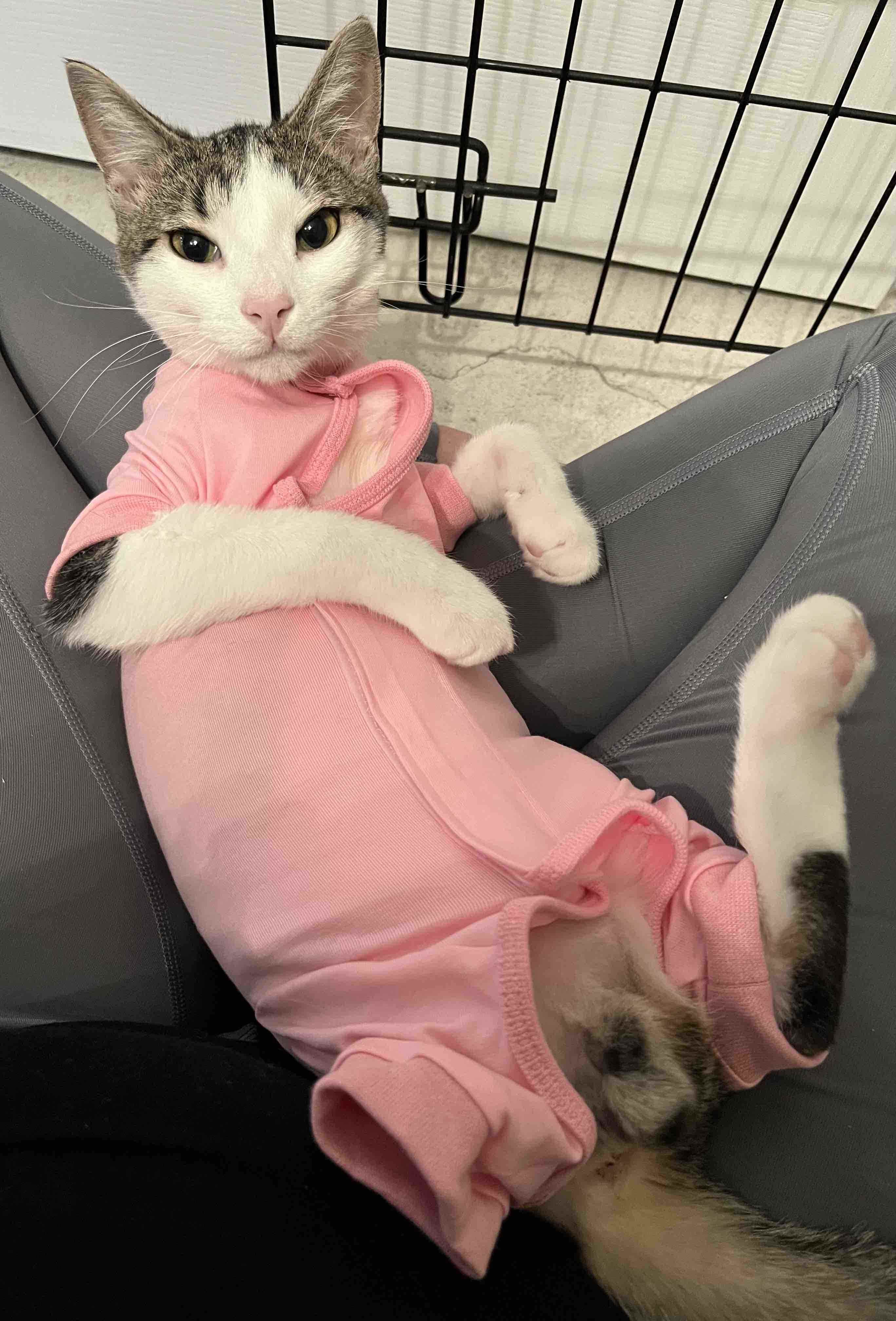 We additionally opted to keep Andy in a large dog crate for the first 2.5 weeks after surgery. This was primarily to keep him from jumping or getting stuck somewhere with his cone. While we likely could have kept him in the bathroom, we were concerned he would attempt to jump on the toilet. The motivation for keeping him from jumping was two-fold: 1) We didn’t want him doing anything to aggrevate the healing of his wound by pulling on the staples and 2) He was on some serious pain medications and thus was a bit wobbly. We were concerned that he would hurt himself while attempting to jump. 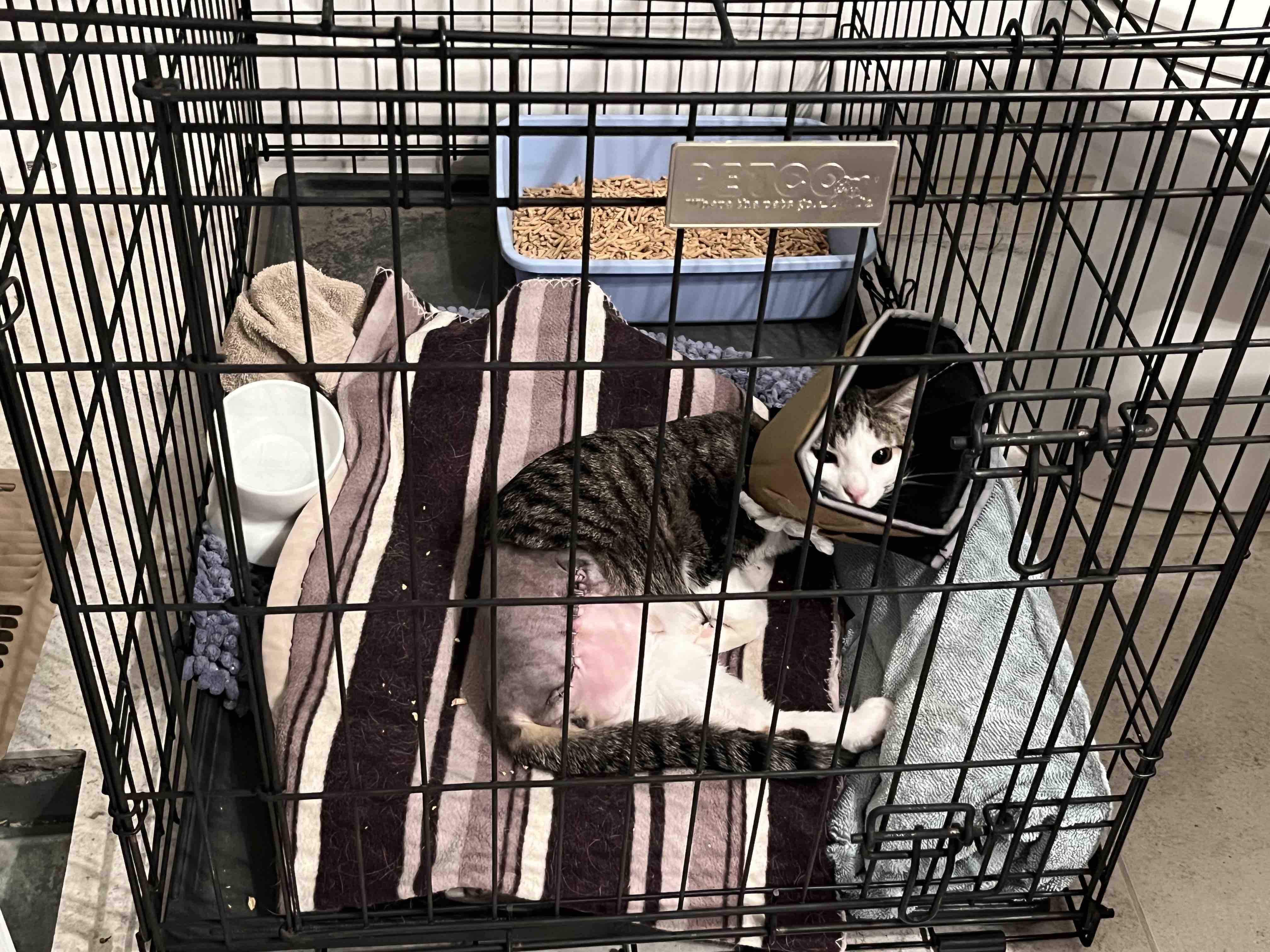 Andy had both internal stitches that dissolved over time as well as large external staples. The staples were removed after 12 days (our vet told us this could be done 12-14 days after surgery) and we continued to restrict his movement and keep his cone on for another 6 days after his staples were removed. In other words, Andy was confined to the crate for the first 2.5 weeks unless we were able to supervise him. Towards the end of the 2.5 weeks, he was more comfortable getting around with his cone on and would happily sit and watch the birds without trying to lick his wound. 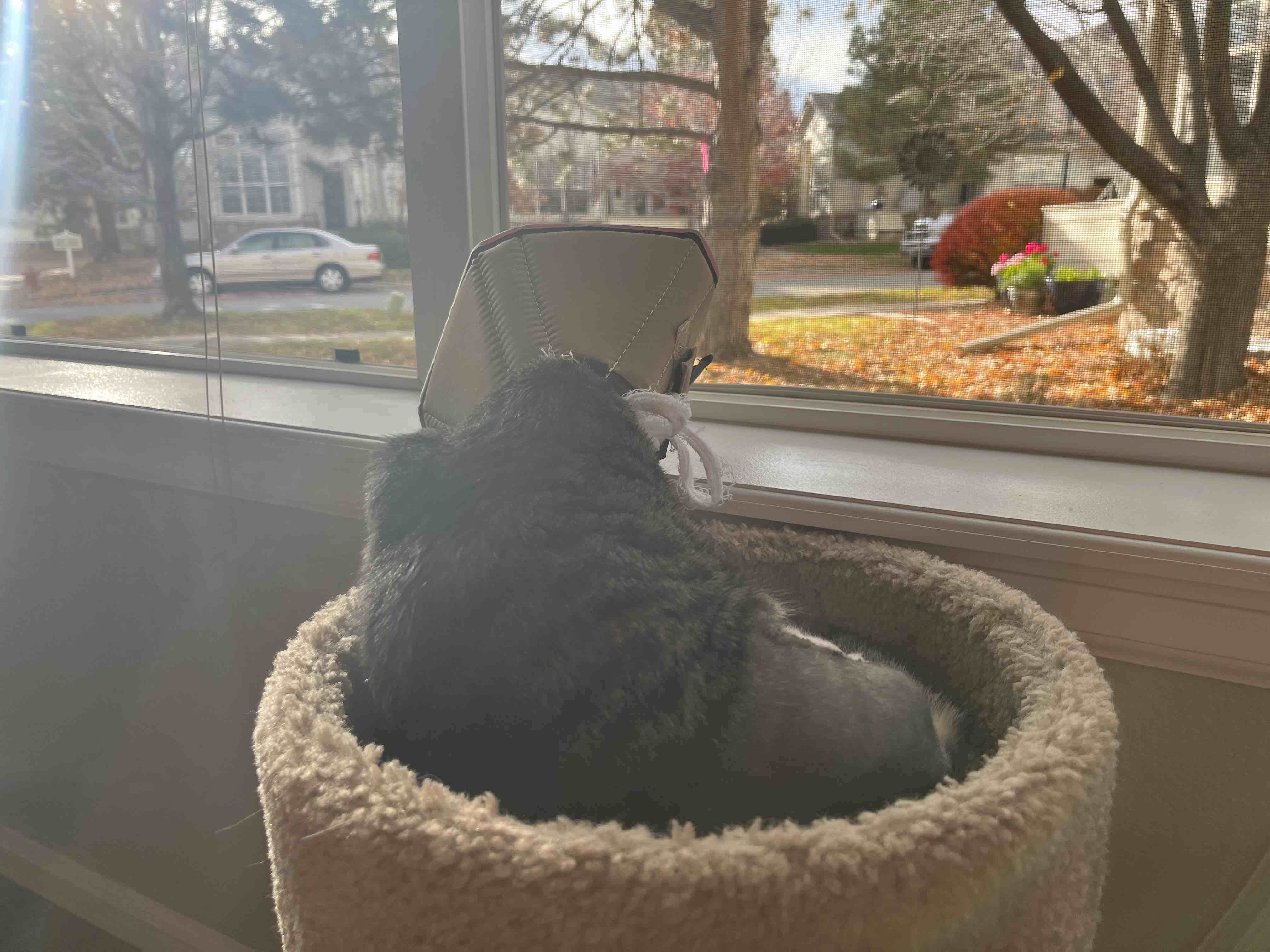 Going into the surgery, we were concerned about Andy’s ability to use the litter box or walk right after, but this turned out generally not to be an issue. He went to the bathroom just a few hours after returning home (so, around 6 hours after his surgery) and was able to balance. We were already using Oko cat litter and it was helpful to not be using a small-grained or dusty litter that could get into his incision site. We also switched out his litter box to one with much lower sides so it was easier for him to walk into. One issue we did run into on a somewhat regular basis was that he couldn’t see his pee or poop once he had gone to the bathroom because of the cone. This meant that he often stepped in it before exiting the litter box. He then couldn’t clean himself (his paws, or behind) due to the cone. So, for the 2.5 weeks with the cone, we would frequently wipe him down with a damp towel to keep him clean.

Overall, Andy’s movement was considerably better than I expected, given that he had just lost a leg. He was a little shaky for the first couple of days, but he never had any issues moving around. He still doesn’t have full mobility, but he has no issues running full-speed through the house to catch a toy. He also still prefers to use the small animal stairs to get onto our bed, or into his cat tree. He also does not jump higher than the couch.

We gave him regular pain medication for the first 10 days as instructed by our vet along with a few other medications. He never showed any signs of being in pain, which was wonderful!

I took a picture almost daily of his hair regrowth and wound healing and turned it into a small video. While there is no blood, and the healing goes smoothly, there are still a few somewhat-graphic images (he did get his leg removed, after all). Take look at the video below:

For more information, including resources and support groups, please check out the Tripawd website. I found it very helpful when trying to decide if amputation was right for Andy.